18 Things to Know About Volodymyr Zelensky, Jewish Defender of Ukraine
Order "It Takes a Counter-Revolution!" at Amazon.com
Donate and Support Freedom Watch at www.FreedomWatchUSA.org 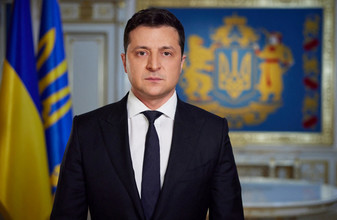 By PHILISSA CRAMER/JTA
The Jerusalem Post | JPost.com
March 17, 2022
The world has had a crash course on Volodymyr Zelensky in recent days, as the Ukrainian president has galvanized his country against an unprovoked attack by neighboring Russia.

The broad strokes of Zelensky's career have long been known to those who pay attention to Ukrainian politics — or to their spillover effects in American government. He's young, funny, Jewish and committed to a strong democratic Ukraine, even at the risk of death. "I need ammunition, not a ride," he reportedly told American authorities this week after they offered to evacuate him from Ukraine.

But as someone who has long been in the public eye, and not always in politics, Zelensky has left more to know than that. We scoured interviews in multiple languages, scrolled back through his social media posts and compiled some amazing YouTube clips to offer a more nuanced portrait.