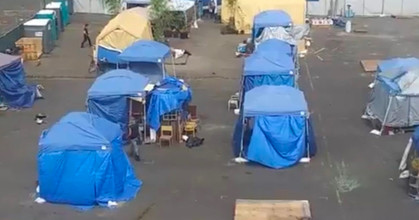 NewsWars
September 10, 2020
A cameraman claims to have located an Antifa encampment where rioters are housed in Portland, Oregon.

In the video, the man highlights a large tent city located near Burnside Bridge barricaded behind fences, complete with port-a-potties and portable tents for shade.

Describing the area as a "war encampment," the cameraman asserts the tent city is being funded by the City of Portland.