Tucker Carlson Bashes Trump Attorney Sidney Powell for Lack of Evidence in Fraud Claims: 'She Never Sent Us Any' 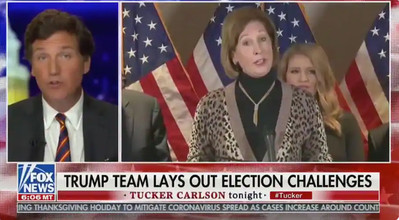 Washington Post
November 20, 2020
On his Thursday show, Carlson didn't discount the larger claims of Trump's attorneys that massive fraud disrupted the election — an allegation that has been repeatedly dismissed in court and for which the White House has presented no public evidence.

But Carlson's rebuke of Powell marked a notable departure for a show — and a network — that has given hours of credulous coverage to false claims by President Trump and his associates that fraud cost him the election. It came after Fox News aired a rambling news conference on Thursday featuring Powell and Trump's personal attorney, Rudolph W. Giuliani, making numerous false and far-fetched allegations about the election.

The segment also put Carlson at odds with other Fox News hosts like Jesse Watters, who on his Thursday show described Powell and Giuliani's news conference as "a big shot of adrenaline."