Trump Retweets Image of Pelosi, Schumer in Muslim Garb Next to Iranian Flag
Join and Support Our Coalition of the Jewish Right at www.FreedomWatchUSA.org 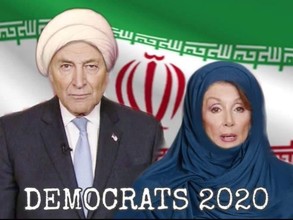 By Ronn Blitzer
Fox News
January 13, 2020
Rich Edson reports from the State Department on the new images being taken from the protests against the regime in Iran.

President Trump retweeted a photoshopped image depicting House Speaker Nancy Pelosi and Senate Minority Leader Chuck Schumer in Muslim headwear with a backdrop of the Iranian flag, in the midst of a Monday morning Twitter spree in which he shared a number of posts accusing Democratic leadership of supporting the Iranian government.

The president's political opponents have blasted him for ordering the drone strike against Iranian Gen. Qassem Soleimani, who has been linked to numerous attacks on American forces and more. Meanwhile, they largely have remained silent as the Iranian people have staged massive protests against their leaders, in the wake of the government shooting down a passenger plane and initially denying it.