'This Is Not a Television Program': Mulvaney Slams Giuliani's Role on Trump Campaign Legal Team 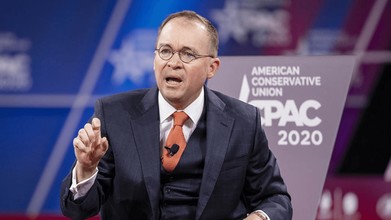 By Quint Forgey
POLITICO
November 18, 2020
Former acting White House chief of staff Mick Mulvaney on Wednesday slammed Rudy Giuliani's leadership of the Trump campaign's election-related legal challenges, saying the effort to reverse the presidential race's outcome "is not a television program" and should be handled by more experienced attorneys.

"I'm still a little concerned about the use of Rudy Giuliani. It strikes me that this is the most important lawsuit in the history of the country, and they're not using the most well-noted election lawyers," Mulvaney, who served as President Donald Trump's top aide from January 2019-March 2020, told Fox Business.

"There are folks who do this all of the time. This is a specialty. This is not a television program. This is the real thing," Mulvaney said. "And I was struck by a couple things that Rudy said in court yesterday. So on one hand, I think it needs to go forward. It absolutely does. I wish that it was being prosecuted a little more efficiently."