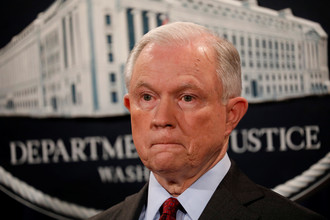 We the People Call on President Trump to Remove Jeff Sessions as Attorney General and Replace Him With a Competent Attorney Who Has the Guts to Prosecute Hillary Clinton, James Comey, Robert Mueller, and Others That Were Part of the Corrupt, Even Treasonous, Obama Administration and Hold Them Accountable for Their Crimes!

Sessions' Incompetence and "Disgraceful" Dereliction of Duty Regarding His Inaction on Fusion GPS, the Phony Steele Dossier, and the Illegal and Unconstitutional Wiretapping of the President and His Associates Disqualify Him From the Office of Attorney General. We Demand He Resign or Be Removed!
Your Name:
Your Email:
Phone Number:
Street Address:
City:
State:
Zip:
Receive Freedom Watch updates

NOTE: A confirmation message will be sent to your email address if you are not already in our system. This is used to verify your petition, which will not be counted until you click the link in the email.

Once you are confirmed, your name and comments will appear publicly below.
Please check your inbox
A confirmation message has been sent to . This is used to verify your petition, which will not be counted until you click the link in the email. If the email doesn't come through, click here to re-send it.

Once you are confirmed, your name and comments will appear publicly on this page.