Scuffles Break Out in Glendale as Rep. Adam Schiff Speaks at Town Hall 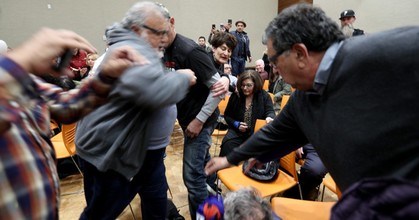 Los Angeles Times
December 15, 2019
At a town hall event where an Armenian organization was thanking U.S. government officials for their support of resolutions recognizing the Armenian genocide, scuffles broke out as Rep. Adam B. Schiff (D-Burbank), a co-sponsor of a resolution on the issue, spoke in the auditorium at the Glendale Central Library.

As Schiff began speaking, a man and two women held up signs reading,"Don't Impeach." When they were asked to take down the signs, they refused.

Then, about a dozen people scattered throughout the auditorium began yelling, "Liar."