McConnell Privately Says He Wants Trump Gone as Republicans Quietly Lobby Him to Convict
Order "It Takes a Revolution: Forget the Scandal Industry!" at Amazon.com 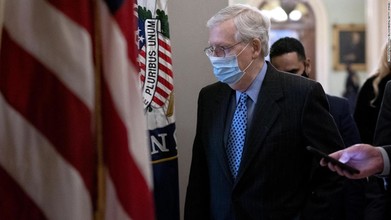 By Michael Warren and Jamie Gangel
CNN
January 22, 2021
Washington (CNN)As the House prepares to send articles of impeachment to the Senate on Monday, CNN has learned that dozens of influential Republicans around Washington -- including former top Trump administration officials -- have been quietly lobbying GOP members of Congress to impeach and convict Donald Trump. The effort is not coordinated but reflects a wider battle inside the GOP between those loyal to Trump and those who want to sever ties and ensure he can never run for President again.

The lobbying started in the House after the January 6 attack on the Capitol and in the days leading up to impeachment. But it's now more focused on Sen. Mitch McConnell, the powerful minority leader who has signaled he may support convicting Trump.