Klayman: When Graham Loses Reelection No Loss to Real Conservatives! 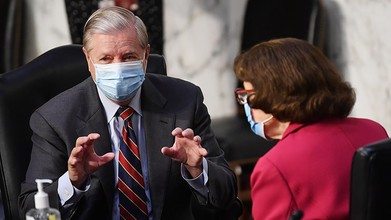 Graham to Democrats: 'Y'all have a good chance of winning the White House'
By Jordain Carney
TheHill
October 15, 2020
Sen. Lindsey Graham (R-S.C.) told Democrats during a Judiciary Committee meeting on Thursday that he believes Democratic nominee Joe Biden has a "good chance" of winning the November election.

Graham's comments came as he was responding to Democratic criticism of the Republican process for moving Judge Amy Coney Barrett's Supreme Court nomination. Republicans set up a committee vote on her nomination for next week, and the full Senate is expected to hold a vote on her by the end of the month.

"Democrats generally look at people of a disposition like Justice [Sonia] Sotomayor and [Elena] Kagan. Now, y'all have a good chance of winning the White House. I don't know where the polls are going to be," said Graham, the Judiciary panel chairman.