Klayman: To Muslim Groups Even Humor Is Racist: The World Does Not Hear Them Support Our President Over Iran! We Know What Side They Are on as Is Schumer and Pelosi! 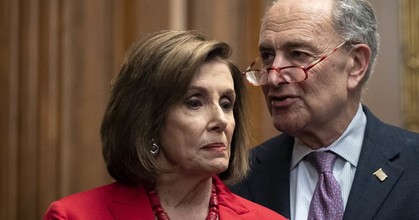 The manipulated photo retweeted by Trump showed House Speaker Nancy Pelosi and Senate Minority Leader Chuck Schumer in Muslim garb with the caption: "The corrupted Dems trying their best to come to the Ayatollah's rescue #NancyPelosiFakeNews." Trump, a Republican, had previously faulted Democrats for criticizing his administration's targeted killing of Iranian Gen. Qassem Soleimani, but his use of Muslim imagery as part of that effort drew pushback from Muslim American advocates.

"The image is a hodgepodge of anti-Muslim tropes and garb from many traditions including some that are frequently used to stereotype and attack Muslims," Madihha Ahussain, special counsel at the nonprofit group Muslim Advocates, said in a statement. "It's disappointing but not surprising that the president would use his massive Twitter platform to spread this kind of harmful, ignorant, anti-Muslim bigotry.