Klayman: The President Is Right: Rosenstein Should Be Indicted, Tried, Convicted and Jailed!
Go to www.FreedomWatchUSA.org to Support Citizens Grand Juries! Also Donate and Share! 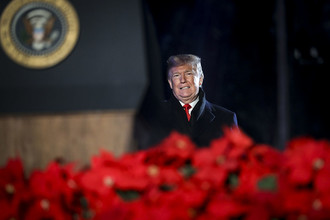 Trump: Rosenstein belongs in jail because 'he never should have picked a special counsel'
By Caitlin Oprysko
POLITICO
November 29, 2018
Rosenstein is responsible for picking Mueller to lead an investigation into Russian interference in the 2016 election — a probe that now includes whether Trump sought to obstruct justice — following then-Attorney General Jeff Sessions' decision to recuse himself from the investigation and Trump's decision to fire Comey, then the FBI director.

After his firing, Comey passed to the media memos detailing interactions he'd had with the president, including one in which Trump reportedly asked the FBI chief for his loyalty. The publication of details from Comey's memos helped prompt Rosenstein to appoint a special counsel, a move that has earned the ire of Trump.