Klayman: Stone Again Attacks Judge Who Sentenced Him to Prison for Perjury, Witness Tampering and Obstruction of Justice! Not Smart! 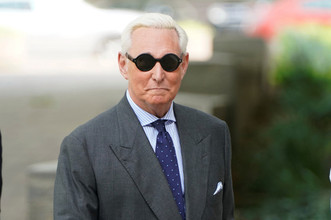 Roger Stone banned from Facebook, Instagram after controversial post
New York Post
July 8, 2020
President Trump's longtime adviser Roger Stone has been blocked on Facebook and Instagram just days after he publicly asked the commander-in-chief for clemency and petitioned a federal appeals court to put off his 40-month prison sentence, his supporters charged.

"Facebook and Instagram have just disabled Roger Stone's account in an outrageous display of censorship and because he dares to fight to prove his innocence. WE ARE ALL ROGER STONE NOW. @JackPosobiec @johncardillo @realDonaldTrump," tweeted an account called "Age of Stone" that was tagged to the president, conspiracy theorist Posobiec and conservative journalist Cardillo.

Stone had posted a meme on Instagram Monday depicting him as a sword-wielding Spartan hero from the flick "300," while showing federal Judge Amy Berman Jackson, who sentenced him, as Xerxes, the film's evil antagonist, the National Memo reported.