Klayman: Obama Continues to Stoke Racial Division and Discord!
Go to www.FreedomWatchUSA.org and Support Our Citizens Grand Juries and Join Our Justice League! 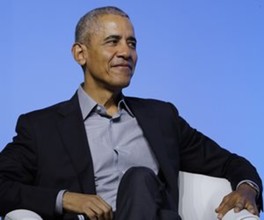 Obama Criticizes Virus Response in Online Graduation Speech
By Jill Colvin
Newsmax
May 17, 2020
Former President Barack Obama on Saturday criticized U.S. leaders overseeing the nation's response to the coronavirus, telling college graduates in an online commencement address that the pandemic shows many officials "aren't even pretending to be in charge."

Obama spoke on "Show Me Your Walk, HBCU Edition," a two-hour event for students graduating from historically black colleges and universities broadcast on YouTube, Facebook and Twitter. His remarks were unexpectedly political, given the venue, and touched on current events beyond the virus and its social and economic impacts.

"More than anything, this pandemic has fully, finally torn back the curtain on the idea that so many of the folks in charge know what they're doing," Obama said. "A lot them aren't even pretending to be in charge."