Klayman: No Surprise: Caputo Is a Roger Stone Surrogate and a Very Dishonest Person! Trump Should Never Have Allowed Him to Be HHS Press Secretary! 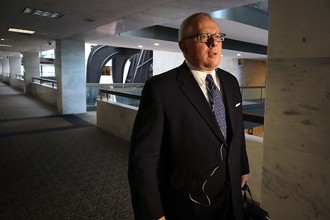 Caputo apologizes to HHS staff, signals desire for medical leave
By Adam Cancryn, Dan Diamond, Sarah Owermohle
POLITICO
September 15, 2020
The health department's top spokesperson Michael Caputo called an emergency staff meeting on Tuesday to apologize for drawing negative attention to the Trump administration's health care strategy and signaled that he might be soon departing his role, according to five people with knowledge of the meeting.

The departure of Caputo, who has closely controlled the health agencies' dissemination of information about coronavirus, would be a blow to the Trump administration's efforts to promote a possible vaccine, if one is approved in the fall.

Caputo told staffers that his series of false accusations on Facebook Live this weekend — which included unfounded allegations that the Centers for Disease Control was harboring a "resistance unit" — reflected poorly on HHS' communications office. He blamed his recent behavior on a combination of physical health issues and the toll of fielding death threats against his family. Caputo also acknowledged that he had never read one of the CDC's Morbidity and Mortality Weekly Reports, despite his team's ongoing efforts to try to edit those documents.