Klayman: More Trash From the NYT: Trump Was Empowered to Fire Who He Pleased at DOJ! Too Bad He Did Not Fire More Political Hack Lawyers!
Order "It Takes a Revolution: Forget the Scandal Industry!" at Amazon.com 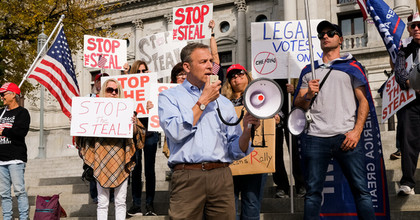 But Mr. Perry, an outspoken Pennsylvania Republican, played a significant role in the crisis that played out at the top of the Justice Department this month, when Mr. Trump considered firing the acting attorney general and backed down only after top department officials threatened to resign en masse.

It was Mr. Perry, a member of the hard-line Freedom Caucus, who first made Mr. Trump aware that a relatively obscure Justice Department official, Jeffrey Clark, the acting chief of the civil division, was sympathetic to Mr. Trump's view that the election had been stolen, according to former administration officials who spoke with Mr. Clark and Mr. Trump.