Klayman: MLB Should Now Make Obama Its Mascot!
Order "It Takes a Revolution: Forget the Scandal Industry!" at Amazon.com 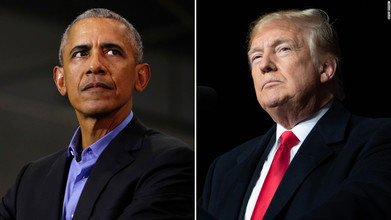 Obama congratulates MLB for 'taking a stand' against Georgia election law as Trump calls for boycott
By Veronica Stracqualursi
CNN
April 3, 2021
(CNN)Former Presidents Barack Obama and Donald Trump have weighed in on Major League Baseball's decision to move its All-Star Game out of Atlanta in response to Georgia's new sweeping election law that imposes significant new obstacles to voting.

Obama on Saturday congratulated the league "for taking a stand on behalf of voting rights for all citizens," following MLB's Friday announcement. The Democrat's tweeted support of the move struck a starkly different tone from his Republican successor's statement late Friday that called for a boycott of baseball and all of the "woke companies that are interfering with Free and Fair Elections."