Klayman: Jimmy Kimmel Is a Bad Joke and an Arrogant Ass...e!
Order "It Takes a Revolution: Forget the Scandal Industry!" at BarnesandNoble.com 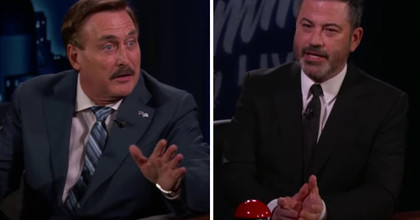 Jimmy Kimmel Shuts Down MyPillow Guy Mike Lindell In Wild Late Night Interview
Decider
April 30, 2021
True to his word, Jimmy Kimmel had none other than MyPillow CEO Mike Lindell as his special guest on last night's episode of Jimmy Kimmel Live. And as expected, the whole wild interview was a bit of a mess. While Lindell has been a constant fodder for jokes on Kimmel's show, he appeared for a sit-down chat last night that covered everything from death threats against him to his recovery from a crack addiction, HuffPost reports.

"A lot of people didn't want you to come on the show. Liberals and conservatives, everybody said, told me, don't have you on the show, and they told you, don't go on the show. But I think it's important that we talk to each other," Kimmel told his guest.