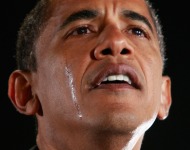 Washington, D.C. (January 19, 2016) – A challenge in federal court has been filed against the expansion of gun control laws by President Barack Hussein Obama. Larry Klayman filed the first-in-the-nation lawsuit Monday in the U.S. District Court for the Southern District of Florida (Case No. 9:16cv80087). See www.FreedomWatchUSA.org to view complaint.

On January 4, 2016, Obama announced new gun control rules by unilateral executive action. Obama ordered the Bureau of Alcohol Tobacco and Firearms ("ATF") and other agencies to enforce a new re-interpretation of the laws Congress passed. Citing Congress' failure to agree with him, Obama claims the power to unilaterally change governing statutes by reinterpreting them.

The lawsuit alleges that Obama does not have the legal authority to redefine the laws enacted by Congress. Obama has ordered ATF to redefine, in its enforcement activities, who is a "dealer" in firearms "engaged in the business of selling firearms." The change of interpretation now sweeps up persons who do not seek to earn a livelihood or make a profit, who buy or sell as few as one or two guns a year. Worse, the new rules are so vague and subjective that Klayman challenges them as "void for vagueness." Being treated as a dealer now creates the obligation to conduct background checks for those sales.

Similarly, Obama is changing under such background checks a person prohibited from buying a gun from one formally adjudicated by a court of law to be mentally incompetent to anyone who – vaguely – has a mental health "issue." Thus, the due process protection of a court ruling is being lost. Obama ordered the Social Security Administration to report to the firearm background check database people on disability payments for reasons that may indicate "issues" of mental health. Obama is working to require doctors to report those with (poorly defined) issues. Everyone living in the same household may lose the right to possess a gun.

Larry Klayman is founder, chairman and general counsel of Freedom Watch and also a former U.S. Justice Department prosecutor. Klayman is a member of the National Rifle Association. On October 7, 2013, Klayman previously sued to stop Obama's and Vice President Joe Biden's Gun Control Task Force for "holding closed door meetings with special interest lobbyists" in violation of the Federal Advisory Committee Act. He recently won a preliminary injunction against the NSA for its illegal spying on all Americans. www.freedomwatchusa.org