Klayman: Dems and Left Move to Bury Trump So He Cannot Try to Rise Again as Phony Conservatives Cut and Run!
Order "It Takes a Revolution: Forget the Scandal Industry!" at Amazon.com 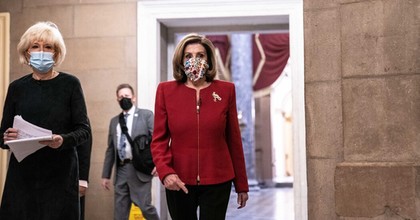 Democrats Ready Impeachment Charge Against Trump for Inciting Capitol Mob
By Nicholas Fandos, Maggie Haberman and Luke Broadwater
New York Times
January 9, 2021
WASHINGTON — Democrats laid the groundwork on Friday for impeaching President Trump a second time, as Speaker Nancy Pelosi of California threatened to bring him up on formal charges if he did not resign "immediately" over his role in inciting a violent mob attack on the Capitol this week.

The threat was part of an all-out effort by furious Democrats, backed by a handful of Republicans, to pressure Mr. Trump to leave office in disgrace after the hourslong siege by his supporters on Wednesday on Capitol Hill. Although he has only 12 days left in the White House, they argued he was a direct danger to the nation.

Ms. Pelosi and other top Democratic leaders continued to press Vice President Mike Pence and the cabinet to invoke the 25th Amendment to wrest power from Mr. Trump, though Mr. Pence was said to be against it. The speaker urged Republican lawmakers to pressure the president to resign immediately. And she took the unusual step of calling Gen. Mark A. Milley, the chairman of the Joint Chiefs of Staff, to discuss how to limit Mr. Trump's access to the nation's nuclear codes and then publicized it.