Klayman: Deification of John Lewis Not Honest! Even Fox News Has Joined In!
Go to www.FreedomWatchUSA.org to Join and Support Our Leftist Media Strike Force! Share and Donate 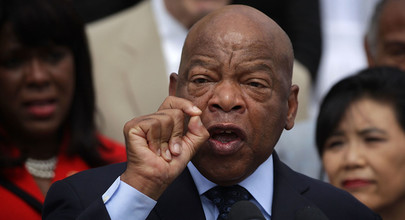 'I think he is a racist,' John Lewis says of Trump
By Connor O'Brien
POLITICO
July 27, 2020
Rep. John Lewis on Sunday said he believes President Donald Trump is a racist in the wake of racially charged remarks the president reportedly made last week about people coming to the United States from "shithole" countries.

"I think he is a racist," Lewis, a Georgia Democrat and icon of the civil rights movement, said on ABC's "This Week."

Lewis was asked by moderator George Stephanopoulos how he reconciled remarks Trump made Friday commemorating Martin Luther King Jr. Day with his "shithole" comment, reported to have been made during an immigration meeting with a bipartisan group of lawmakers Thursday.