Klayman: CNN "The Communist News Network" Rejoices at Biden-Harris Use of the DOJ/FBI as Their Own "Gestapo!"
Order "It Takes a Revolution: Forget the Scandal Industry!" at BarnesandNoble.com 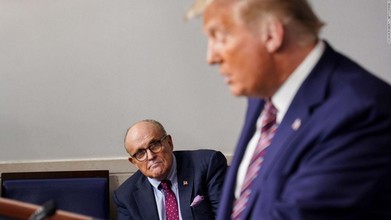 Trump allies worry Giuliani raid sent 'strong message' to ex-President's inner circle
By Gabby Orr
CNN
May 1, 2021
(CNN)A Wednesday raid by federal agents of an apartment and office belonging to former New York City mayor and one-time Donald Trump lawyer Rudy Giuliani has left allies of the former President feeling uneasy about what could come next, according to sources close to Trump.

"This was a show of force that sent a strong message to a lot of people in Trump's world that other things may be coming down the pipeline," one Trump adviser told CNN.

The searches, which Giuliani and his attorney Robert Costello have criticized as unnecessary due to what they claim is his ongoing cooperation with investigators, were linked to a criminal probe of the former mayor's business dealings in Ukraine and resulted in the seizure of several communications devices.