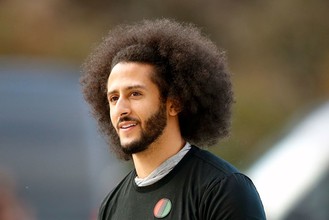 Under terms of the pact, announced Monday, Disney and Ra Vision will emphasize scripted and unscripted stories that deal with race, social injustice and the quest for equity, and work to showcase directors and producers of color. Disney said the agreement would extend across its units, including Walt Disney Television, ESPN, Hulu, Pixar and The Undefeated, an ESPN venue that focuses on matters of race in sports. Kaepernick is slated to work closely with The Undefeated, which Disney said would expand its portfolio across the company.

"I am excited to announce this historic partnership with Disney across all of its platforms to elevate Black and Brown directors, creators, storytellers, and producers, and to inspire the youth with compelling and authentic perspectives," Kaepernick said in a prepared statement. "I look forward to sharing the docuseries on my life story, in addition to many other culturally impactful projects we are developing."