Enlist in the war against government police state! 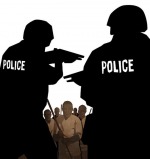 With each new week, the American people learn more about the government's spying on over 300 million citizens – with the obvious intent and effect of coercing and enslaving all of us to its collective will – particularly those who challenge the duplicity, deceit, policies, and corrupt, treasonous and seditious actions of establishment "leaders" like President Barack Hussein Obama, Senate Majority Leader Harry Reid, Senate Minority Leader Mitch McConnell, House Speaker John Boehner and House Minority Leader Nancy Pelosi. Here is what we have learned, thanks in large part to the "leaks" of whistleblower Edward Snowden, National Security Agency ("NSA") Inspector General findings and those few segments of the media still willing to investigate and report on this largest and most heinous violation of constitutional rights in American history.

First we have learned that the NSA, the lackey of the Washington D.C. establishment, has for years obtained the intrusive metadata from cell phone calls and records of the entire American citizenry, without regard, as required by the Patriot Act and Foreign Intelligence Surveillance Act, to whether there is any connection to terrorists or terrorism overseas. In addition, the NSA has also accessed and has in its possession the email, Internet and social media contacts and records of all of us. To try to stop this, I have filed two class action lawsuits against the NSA and its enablers, such as the Obama Justice Department and its Attorney General Eric Holder – both of which work with the NSA to spy on Americans under the authority of President Obama. Thus, Obama was named as a defendant as well. To view copies of these complaints and recent court pleadings seeking preliminary injunctions to stop this illegal and unconstitutional criminal conduct which, after a recent hearing on November 18, the federal court in the District of Columbia is now considering whether to issue, go to www.freedomwatchusa.org.

With regard to the metadata obtained from cell phone use, here is what our expert Edward Felten, Professor of Computer Science at Princeton University, in these cases has to say in sworn testimony about its dangers and use by the NSA potentially and in concrete instances against all of us:

"The structured nature of metadata makes it very easy to analyze massive datasets using sophisticated data-mining and link-analysis programs. That analysis is greatly facilitated by technological advances in computing, electronic data storage, and digital data mining. These advances have radically increased the ability to collect, store, and analyze personal communications, including metadata . . . Sophisticated computing tools permit the analysis of large datasets to identify embedded patterns and relationships, including personal details, habits, and behaviors. As a result, individual pieces of data that previously carried less potential to expose private information may now, in the aggregate, reveal sensitive details about people's everyday lives – details that people had no intent or expectation of sharing."

Thus, in practice, the NSA has the ability to know our most intimate, personal and professional details; your communications with lawyers, accountants, doctors, girlfriends, boyfriends, wives, husbands and paramours and provide this information to the Federal Bureau of Investigation ("FBI"), Internal Revenue Service ("IRS") and other government agencies that are being used as tools by the establishment to destroy us. Indeed, under public pressure, it has now been admitted by the NSA's Inspector General – the semi-independent internal watchdog of the agency – that NSA employees have been using its super spy capabilities to violate the privacy of their so-called loved ones. If such crimes are occurring at this relatively low level, then imagine the as yet not fully disclosed actions of high officials, who play a deadly game to remain in power to enrich themselves at the public trough or in the case of Obama, transform our nation from a capitalist and free state to a socialist Marxist one, generally loyal not to ordinary Americans but to his wildly ultra-leftist, atheist, anti-Judeo-Christian, anti-white and Muslim benefactors, supporters and friends – of which he is their "Manchurian Candidate." Among Obama's supporters and political hit men, notwithstanding the ultra rich and powerful likes of George Soros, who along with his Jewish father sold fellow Jews out to Adolf Hitler during World War II to save their own slimy necks, are the atheist and communist sympathizing groups such as People For the American Way – which Soros supports and contributes to – (and its vile publication Right Wing Watch), Center for American Progress created by George Soros, Hillary Clinton and previously run by former Clinton White House Chief of Staff John Podesta, and its comrade in arms the Southern Poverty Law Center (and its hateful publication Hatewatch), also supported by Soros, who run interference for and do much of the dirty work for the socialist "Mullah in Chief." Soros and these groups foam at their depraved mouths in carrying out their efforts to destroy conservatives, libertarians, people of faith and anyone else who believes in true freedom. Were the intimate details of your life to be fed by Obama and his henchmen to groups such as these, the reputations and lives of anyone seeking to take on the government, which to them is their god, would surely be destroyed as well.

Recently, sure enough it has also been revealed that the NSA and its sister spy agency, the Central Intelligence Agency ("CIA"), have been eavesdropping on pornographic and other intimate internet sites to blackmail and destroy American citizens that get in the establishment's way or could be labeled subversive under their convenient definition. While I am hardly an advocate or user of pornographic sites, there are "bad guys" tied to terrorism and other high crimes who would deserve this treatment and ultimate indictment and conviction, the reality is that it has also been revealed that people having no such connection and committing no such crimes have been surveyed. And, in the last few days we have also learned that the NSA turns on computer webcams and cell phones to watch and listen to whoever the government decides may be a "subversive." It also spies on users of X Box and other video games – including our children, and has the capability to break through encrypted cell phones that users have now been purchasing to avoid this NSA surveillance. So much for the claimed efforts of these cell phone providers and Internet and social media sites to secure user communications! More revelations will be forthcoming and no end is in sight to this government tyranny.

This criminal government conduct and its chilling effect on the First Amendment free speech and associational rights of all Americans cannot be tolerated. If the courts do not step in to stop this massive violation of constitutional rights and then seriously monitor the offending government agencies to make sure that the nation's spy apparatus is used for the purposes for which it is intended – to legitimately protect our national security – then this is cause enough to wage revolution, using all legal and God given means – to end this evil subjugation.

The Founding Fathers would have done no less, and did no less when faced with far less treachery. Now is the time for all of us to stand up, risking our lives if necessary, to restore the freedoms they won for all Americans. If we do not act, then we will be enslaved to the god of a corrupt government, run by despotic establishment tyrants and hacks such as Obama, Reid, McConnell, Boehner and Pelosi, who will use the NSA, FBI, CIA and other agencies to further their own selfish and destructive agendas – in effect waging war on the American people to keep us down and out.

Let us not wait a minute longer for them to employ these illegal spy powers on a massive scale to destroy us by instead now taking the war to them – in the names of Washington, Franklin, Jefferson, Adams, Madison, Patrick Henry and other valiant heroes in our nation's proud history.