Biden-Harris FBI and DOJ "Gestapo" Ratches up Terror Campaign Against Conservatives While Protecting Joe and Hunter Biden Over Bribery From Ukraine, Communist China and Russia! Their Goal Is to Eliminate All Opposition to Total Leftist Takeover and Resulting "Dictatorship!"
Order "It Takes a Revolution: Forget the Scandal Industry!" at BarnesandNoble.com 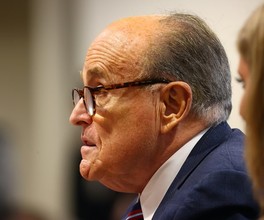 A lawyer for Giuliani, Bob Costello, confirmed that a search warrant had been executed. Electronic devices were among the items seized, according to The New York Times.

Giuliani, 76, did not immediately respond to a request for comment.