Tucker Carlson: Trump Lawyer 'Got Angry' When Pressed for Evidence of Voter Fraud 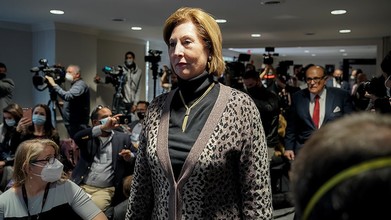 By Jordan Williams
TheHill
November 20, 2020
Fox News host Tucker Carlson on Thursday called out Trump campaign attorney Sidney Powell, saying she "got angry" when he asked her for evidence to support her claims of voter fraud.

During a press conference earlier in the day with Rudy Giuliani, Powell made the allegation that Denver-based Dominion Voting Systems used technology developed by former Venezuelan President Hugo Chávez, who died in 2013. She claimed votes were manipulated while being tabulated overseas to favor President-elect Joe Biden.

There is no evidence to the claim that votes were manipulated and it has been criticized by a number of conservative officials, including Sen. Joni Ernst (R-Iowa), who on Thursday called it "absolutely outrageous."