Trump Warns of 'Problems' Like 'We've Never Seen' If He's Indicted
Order "It Takes a Counter-Revolution!" at Amazon.com
Donate and Support Freedom Watch at www.FreedomWatchUSA.org 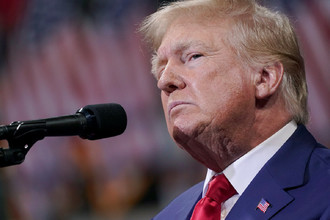 By Myah Ward, Andrew Desiderio
POLITICO
September 16, 2022
Former President Donald Trump said Thursday the nation would face "problems ... the likes of which perhaps we've never seen" if he is indicted over his handling of classified documents after leaving office, an apparent suggestion that such a move by the Justice Department could spark violence from Trump's supporters.

The former president said an indictment wouldn't stop him from running for the White House again and repeatedly said Americans "would not stand" for his prosecution.

"If a thing like that happened, I would have no prohibition against running," Trump said in an interview with conservative talk radio host Hugh Hewitt. "I think if it happened, I think you'd have problems in this country the likes of which perhaps we've never seen before. I don't think the people of the United States would stand for it."