Thomas Jefferson Statue Removed From City Hall After 187 Years
Order "It Takes a Revolution: Forget the Scandal Industry!" at BarnesandNoble.com 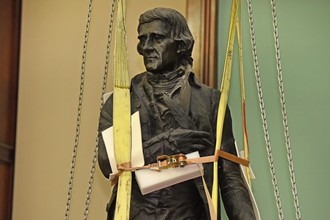 New York Post
November 23, 2021
Art handlers packed up a statue of Jefferson in a wooden crate after a mayoral commission voted to banish the likeness of the nation's third president from City Hall, where it's resided for nearly two centuries — because he owned slaves.

About a dozen workers with Marshall Fine Arts spent several hours carefully removing the painted plaster monument from its pedestal inside the City Council chambers and surrounding it with sections of foam and wooden boards.

They then lowered the massive structure down the stairs leading to the building's first-floor rotunda with a pulley system and ushered the Founding Father out the back door. The statue of Thomas Jefferson was taken out of City Hall today.Gregory P. Mango