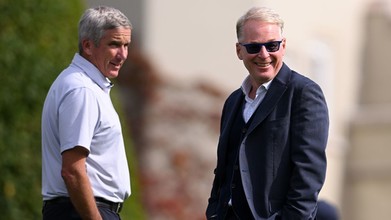 By Mike Hall
Golf Monthly Magazine
November 18, 2022
A lawsuit has been filed in Florida alleging that the PGA Tour, the DP World Tour, and the Official World Golf Ranking (OWGR) have colluded to try to eliminate LIV Golf.

The Second Amended Class Action Complaint, filed on 11 November by US Senate candidate, attorney Larry Klayman, claims that PGA Tour commissioner Jay Monahan and DP World Tour CEO Keith Pelley broke competition laws by conspiring to restrain trade. Monahan and Pelley sit on the board of the OWGR and the lawsuit alleges that it and the tours attempted to end LIV Golf "in its infancy."

The lawsuit also alleges that PGA Tour consumers "have seen the quality of the product that they are paying for at PGA Tour events be diluted and destroyed by a deterioration of the talent level at PGA Tour events due to the exclusion of many of the top players in the world who have signed to LIV Golf."