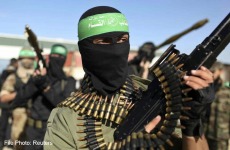 Larry Klayman, the founder of Judicial Watch and now Freedom Watch, and a former U.S. Department of Justice prosecutor who helped break up AT&T, today announced that he and other plaintiffs have filed a civil lawsuit in federal court in D.C. (Case no. 14-1484) under the Racketeer Influenced and Corrupt Organizations Act "RICO" for criminal acts by President Barack Hussein Obama, Secretary of State John Kerry, former Secretary of State Hillary Clinton, and the U.N. Secretary General for laundering U.S. dollars to the terrorist organization HAMAS. This money has been been foreseeably used to buy rockets and construct tunnels to attack Israel and terrorize and kill American and dual American-Israeli citizens who reside or are located in Israel.

As set forth in the complaint, which can be viewed at www.freedomwatchusa.org, the defendants have conspired to send money, that is hundreds of millions of U.S. Dollars to HAMAS, under the false pretext that this financial support will be used for humanitarian purposes. However, as recently reported by Voice of America and the New York Times, the recent killing of the chief HAMAS financial officer by the IDF confirmed that these U.S. dollars, only some of which was found in his bombed out car, has predictably fallen into the hands of HAMAS's terrorist wing which controls and was elected by Gazans to govern over them.

Larry Klayman, the lead plaintiff had this to say upon filing suit: "The nation and the world have increasingly come to see that Obama views himself primarily as a Muslim and acts accordingly in favoring Islamic interests over Judeo-Christian ones, and the complaint lays out Obama's history in documented detail. This includes his actions calculated to harm the nation of Israel. His facilitating and ordering financial and other material aid to HAMAS, along with his equally anti-Israel Secretaries of State Kerry and Clinton, and the U.N. Secretary General, is just the latest deadly chapter in what amounts to criminal activity which has logically resulted in harm and death to Jews and Christians and threatens the continued existence of Israel. That is why he and the other defendants were sued under RICO and other relevant laws."