Copy
Obama Denials Not Credible According to Court Rulings and Whistleblower 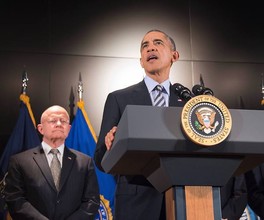 By Larry Klayman
Newsmax
March 5, 2017
The newest revelations that the Obama administration wiretapped, that is "bugged" President Trump and all of his men, in the lead up to and after the November 8, 2016, elections are not surprising. In this regard, for over 2 years the highest levels of the Federal Bureau of Investigation (FBI) have been secretly investigating the "harvesting" of highly confidential information including financial records of the chief justice of the Supreme Court, other justices, over 156 judges, prominent businessmen like Donald Trump, and public activists like me.

In this regard, a whistleblower named Dennis Montgomery, a former NSA/CIA contractor, came forward to FBI Director Comey with 47 hard drives and over 600 million pages of largely classified information, under grants of use and derivative use immunity, which I obtained for him with the U.S Attorney for the District of Columbia. Later, Montgomery, who suffers from a potentially fatal brain aneurism, testified under oath, for over 2-and-a-half hours before FBI Special Agents Walter Giardina and William Barnett in a secure room at the FBI's field office in Washington, D.C. The testimony was under oath and videotaped and I have reminded the FBI recently to preserve this evidence.