Klayman: W Bush Is a Disgrace and an Embarrassment to Himself and the Nation: No Wonder He Paved the Way for the Obamas!
Order "It Takes a Revolution: Forget the Scandal Industry!" at BarnesandNoble.com 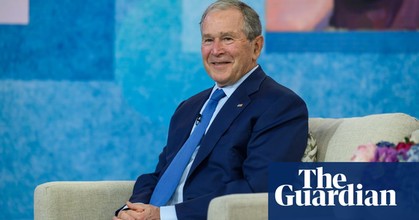 Bush: 'Anglo-Saxon' ideals show pro-Trump Republicans 'want to be extinct'
By Martin Pengelly
the Guardian
May 2, 2021
Ahead of a special election on Saturday to replace a Texas congressman who died after contracting Covid-19, former president George W Bush said the ascendancy of supporters of Donald Trump suggest Republicans "want to be extinct."

The special election is in the sixth district, whose Republican representative, Ron Wright, died in February. Twenty-three candidates will compete: all but one of the 11 Republicans are tied to the apron strings of Trump, the former president who still dominates the party.