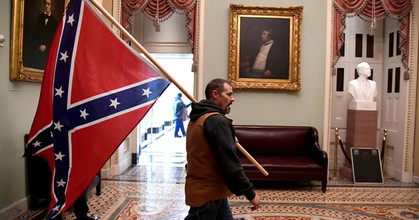 Kevin Seefried, who brought Confederate flag inside Capitol on Jan. 6, found guilty of obstruction of Congress
CBS News
June 16, 2022
A Washington, D.C., federal judge convicted Kevin Seefried, a Jan. 6 rioter who was seen walking through the Capitol with a Confederate flag, on all counts in his U.S. Capitol riot case, including obstruction, entering a restricted building, disorderly conduct and unlawful parading. The judge said he was convinced by the evidence presented by prosecutors, including the testimony of U.S. Capitol Police officer Eugene Goodman, who famously lured the mob away from the Senate chamber on Jan. 6.

Judge Trevor McFadden also cited evidence Seefried had used the Confederate flag to jab at Goodman. Seefried faces sentencing Sept. 16. Minutes after the verdict was read, Seefried was in tears hugging supporters in the courtroom.

Seefried's son, Hunter, was partially acquitted. The judge found Hunter Seefried not guilty of a charge for breaking a window at the Capitol, saying the evidence was not clear. McFadden convicted Hunter of the more serious charge of obstruction.