Klayman: Too Bad That Under Biden-Harris We No Longer Have Liberty but Only Tyranny!
Order "It Takes a Revolution: Forget the Scandal Industry!" at BarnesandNoble.com 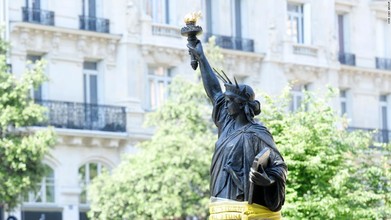 France is sending a second Statue of Liberty to the US
Yahoo News
June 10, 2021
New Yorkers have a surprise gift to look forward to for this Independence Day: a second Statue of Liberty sent by France. This new bronze statue, nicknamed the "little sister," is one-sixteenth the size of the world-famous one that stands on Liberty Island. On Monday, during a special ceremony, the smaller sibling was lifted and loaded into a special container at the National Museum of Arts and Crafts (CNAM) in central Paris, where it has been installed since 2011 in the museum's garden. It will be erected on Ellis Island, just across the water from the original, from July 1 to July 5.

"The statue symbolizes freedom and the light around all the world," said Olivier Faron, general administrator of the CNAM. "We want to send a very simple message: Our friendship with the United States is very important, particularly at this moment. We have to conserve and defend our friendship."