Klayman: This Dumb Article Is Even Stupid by Politico's Low Journalistic Standards!
Order "It Takes a Revolution: Forget the Scandal Industry!" at BarnesandNoble.com 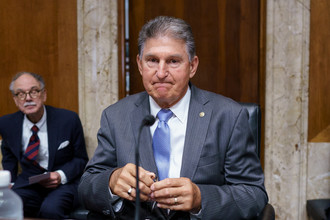 By Burgess Everett, Laura Barrón-López
POLITICO
June 9, 2021
Civil rights groups can't move him and neither can his colleagues. If anyone can sway Joe Manchin, it might be Joe Biden.

Four months after Biden helped secure Manchin's vote for a party-line, $1.9 trillion coronavirus relief law, the president is taking a different approach with the West Virginia Democrat who's blocking multiple party priorities. Biden didn't sound pleased last week when, during a speech marking the 100th anniversary of the Tulsa massacre, he appeared to take a public swipe at Manchin and Sen. Kyrsten Sinema (D-Ariz.) by citing two Democrats who frequently sided with Republicans. Advertisement

But behind the scenes, the president — who spent nearly half his life in the Senate — is taking a more subtle approach to the senator.