Klayman: The Result in Large Part to Posting a Cross Hairs on the Head of the Judge and Other Threats to Witnesses! 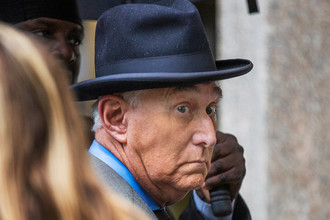 Judge sets July 14 surrender date, immediate home confinement for Roger Stone
By Kyle Cheney, Josh Gerstein
POLITICO
June 27, 2020
A federal judge has ordered longtime Donald Trump confidant Roger Stone to prison on July 14 and into home confinement until then, citing Stone's own evidence of medical issues that he cited to request a delay of his June 30 surrender date to begin a 40-month jail term.

Judge Amy Berman Jackson denied Stone's request to delay the start of his sentence until Sept. 3, instead giving Stone just over two weeks to report to FCI-Jesup.

"This will address the defendant's stated medical concerns during the current increase of reported cases in Florida, and Broward County in particular, and it will respect and protect the health of other inmates who share defendant's anxiety over the potential introduction and spread of the virus at this now-unaffected facility," Jackson said in a brief order accompanying her decision.