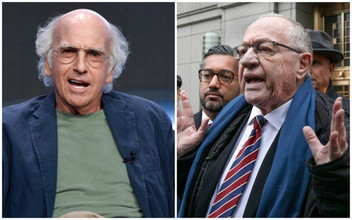 Larry David Confronts Alan Dershowitz in Heated Encounter at Martha's Vineyard Grocery Store
By Ryan Lattanzio
IndieWire
August 19, 2021
Life imitating "Curb Your Enthusiasm"? Comedy mogul Larry David and lawyer Alan Dershowitz reportedly clashed over politics at a Martha's Vineyard grocery store in an incident that sounds ripped straight out of David's long-running HBO comedy series. Page Six has the scoop on the altercation, in which David confronted Dershowitz over his ties to the former Trump administration.

David replied, "No. No. We really can't. I saw you. I saw you with your arm around [former Trump Secretary of State Mike] Pompeo! It's disgusting!"