Klayman: The Civil War Has Begun and the Left Will Lose! Go to www.FreedomWatchUSA.org to Join Freedom Watch's Justice League! Share and Donate 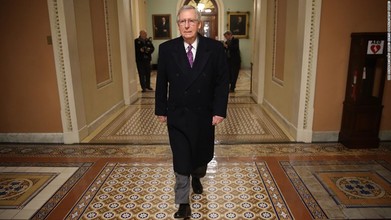 McConnell chased from KY restaurant by protesters
By Devan Cole
CNN
July 9, 2018
Senate Majority Leader Mitch McConnell was followed to his car Saturday by protesters who hurled both personal insults and political rhetoric at him while he left a Kentucky restaurant.

The encounter, which took place in a parking lot outside of a Louisville restaurant, was captured on camera by one of the protesters. In the video, you can hear the group of protesters chanting "vote you out!" and "abolish ICE!" to the Republican senator from Kentucky. One man can be heard calling the senator "turtle head" and repeatedly saying "we know where you live" as the senator and two dining companions climb into their parked vehicle.