Klayman: "Special Counsel" Larry Klayman and the American People Will Hold the Criminals of the Biden DOJ and Fraudulently Elected Biden Himself Accountable for Their Heinous Crimes!
Order "It Takes a Counter-Revolution!" at Amazon.com
Donate and Support Freedom Watch at www.FreedomWatchUSA.org 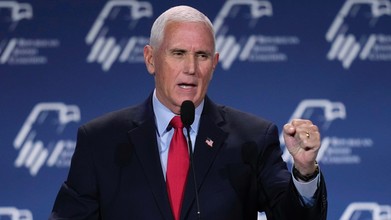 Attorney General Merrick Garland on Friday appointed former Justice Department official Jack Smith to the role of special counsel to investigate the entirety of the criminal probe into the retention of presidential records held at Trump's Mar-a-Lago home. Smith will also oversee the DOJ's investigation into the Capitol riot on Jan. 6, 2021.

During a sit-down interview with Fox News Digital on the sidelines of the Republican Jewish Coalition annual leadership conference in Las Vegas, Nevada, Pence criticized the Justice Department for its "politicization"— especially with regard to Trump.