Klayman: No Need for This Sham Committee: We Know the Cause of Jan. 6! Rank Cancerous Corruption in All Three Branches of Gov't!
Order "It Takes a Revolution: Forget the Scandal Industry!" at BarnesandNoble.com 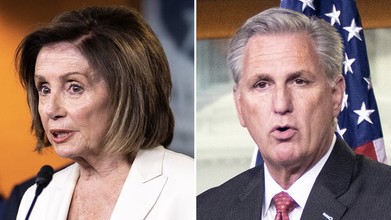 House erupts in anger over Jan. 6 and Trump's role
By Mike Lillis and Scott Wong
TheHill
July 22, 2021
Smoldering tensions over the Jan. 6 Capitol attack exploded Wednesday in a partisan battle over who should sit on the special committee investigating the deadly siege — a clash of wills that spurred Republicans to end their participation in the investigation before it began.

The fight started just after noon when Speaker Nancy Pelosi (D-Calif.) said she would reject two of the five Republican nominees to the panel, Reps. Jim Banks (Ind.) and Jim Jordan (Ohio). Both are among the most staunch defenders of former President Trump and deny his role in instigating the attack, and Pelosi — fueled by objections from within her caucus — accused the pair of threatening "the integrity" of the coming investigation.