Klayman: Ms. Spiranac Deflate Your Boobs and Then Let's See How Many Followers on Social Media You Will Have for Your "Words of Wisdom"!
Order "It Takes a Revolution: Forget the Scandal Industry!" at BarnesandNoble.com 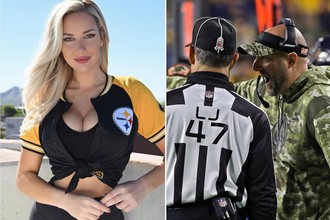 Even Steelers fan Paige Spiranac is slamming 'trash' officiating against Bears
New York Post
November 9, 2021
Paige Spiranac's Pittsburgh Steelers may have squeaked away with a win on Monday night, but even she was appalled by the officiating.

Taking to Twitter, the golf influencer weighed in on the Steelers' showdown against the Bears on "Monday Night Football," which was littered with questionable calls. In the fourth quarter, Bears linebacker Cassius Marsh was flagged for taunting following a sack, in which he appeared to glance at the Pittsburgh sideline from a distance after the fact. As Marsh made his way back to Chicago's sideline, cameras also caught the moment when he and referee Tony Corrente made contact, with the ref throwing a flag immediately after.