Klayman: More BS From DOJ and Fox News Which Promotes This BS to Boost Ratings and Ad Dollars: Ask Yourself? Where Is Durham's Grand Jury? There Is None! So Much for a Real Investigation and Not the Sham of AG Bill Barr!
Go to www.FreedomWatchUSA.org and Support Our Citizens Grand Juries and Join Our Justice League! 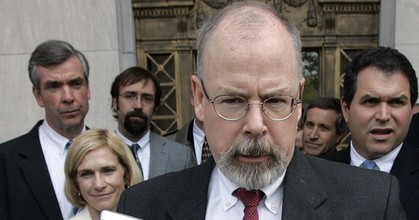 'Strong' paper trail has John Durham investigating the months before Mueller appointment
Washington Examiner
January 18, 2020
A trail of documents has reportedly led Attorney General William Barr's handpicked federal prosecutor to focus his inquiry into the origins of the Russia investigation on the first several months of President Trump's tenure.

John Durham, a U.S. attorney from Connecticut, is zeroing in on the period spanning from January 2017, when Trump took office, to May of that year. A "strong" paper trail, as CBS News senior investigative correspondent Catherine Herridge put it on Friday, has led the investigation into possible misconduct by federal law enforcement and intelligence officials to that time frame.

While Trump and his allies have championed Durham's effort, Democrats have dismissed the allegations of wrongdoing during the Trump-Russia investigation and are concerned the inquiry may be an effort to discredit the work of special counsel Robert Mueller. Trump gave Barr full declassification authority for the endeavor.