Klayman: Hannity Is Right but He Should Stop Repeating the Same Monologue Every Night and Stop Misleading His Audience That the Gov't Will Mete Out Justice! He Makes These False Predictions to Boost His Ratings but the American People Need the Truth!
Go to www.FreedomWatchUSA.org and Support Our Citizens Grand Juries and Join Our Justice League! 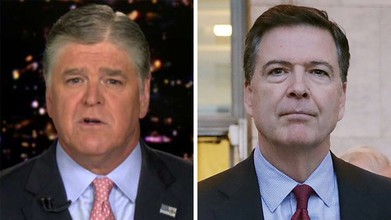 "For two and a half years, our ensemble cast. We got the crap beat out of us every day. We were beaten up. We were made fun of. That's all fine. I don't really care what anybody says anymore," Hannity said on his television program. "But you, we the people, we were right every step of the way. And the inspector generals, FISA abuse report, while limited in scope, confirmed and revealed major facts."