Klayman: Even the Left Is Turning on Biden!
Order "It Takes a Revolution: Forget the Scandal Industry!" at BarnesandNoble.com 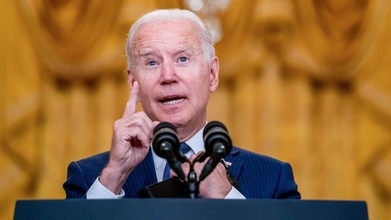 Every Day, Biden Smells Like More of a Loser
By Matt Lewis
The Daily Beast
October 23, 2021
With a hint of confusion in his eyes and a whiff of failure in the air around him, Joe Biden is watching his approval ratings continue to plummet to the point where just 42 percent of Americans approve of his job performance.

Which makes sense, since at least so far Biden really doesn't seem very good at this whole being president thing despite dreaming of and preparing for it for decades. With his staff trying to hide him from the press, and his penchant for saying confusing things, Biden isn't rhetorically equipped to talk himself out of this mess. He was elected on a simple mandate to not be Trump, but after promising not to do Trump things, doing his own thing has proven more difficult.

To some degree, he put himself in this corner. By governing as he campaigned (as a competent centrist), Biden might have locked in a governing majority of alienated center-right Americans along with his extant Democratic coalition. However, Biden chose to abandon efforts to transcend the current political paradigm, choosing instead to appease his base. Talk about a tragic plot twist.