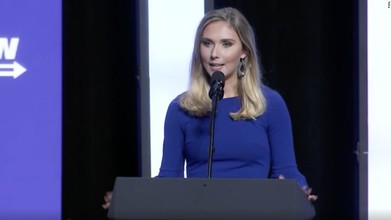 Reagan Escudé, a Turning Point USA ambassador who Trump invited to speak on stage Tuesday over her personal experience with "cancel culture," told the Students for Trump crowd in Phoenix how "Aunt Jemima was canceled," a reference to the syrup brand's decision to rebrand after admitting its more than 130-year logo was racially insensitive.

Escudé, who announced on Twitter earlier this month she had been fired from her job "for giving a Biblical response to social issues," said, "Nancy Green, the original, first Aunt Jemima, she was the picture of the American Dream."