Klayman and Montgomery File for TRO Against Comey and FBI, NSA and CIA Defendants in Case Alleging Obstruction of Justice!

Copy
Motion Will Cause Court to Move Quickly 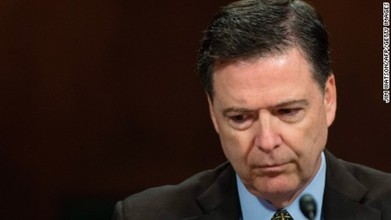 (Washington, D.C., June 20, 2017). Today, Larry Klayman, the founder of both Judicial Watch and now Freedom Watch, and a former federal prosecutor, announced that he and his client whistleblower Dennis Montgomery have moved for a temporary restraining order and preliminary injunction in their lawsuit against former FBI Director James Comey, the FBI itself, and the NSA and CIA, among other defendants. The underlying lawsuit filed in the U.S. District Court for the District of Columbia by Freedom Watch is styled Montgomery and Klayman v. Comey et. al, Civil Action Number 1:17-cv-01074 (RJL).

The case involves allegations that James Comey, in concert with the other defendants, buried an FBI investigation, caused by whistleblower Dennis Montgomery, a former NSA/CIA contractor, into mass illegal surveillance on not just President Trump, but the chief justice of the Supreme Court, other justices, 156 judges, and even Klayman. Montgomery came forward to Comey years ago with 47 hard drives containing classified information, under grant of immunity, and even was interviewed under oath by FBI agents Walter Giardina and William Barnett. Despite this, the complaint and the motion alleges that Comey buried the investigation and thus obstructed justice, since as recently alleged and revealed by Circa News and the Foreign Intelligence Surveillance Court, the FBI was engaged in this illegal and unconstitutional surveillance under Comey, allegedly along with the intelligence agencies.

The motion for TRO and preliminary injunction filed late last night asks the court to order a temporary halt to this continuing illegal surveillance, as well as preserve the evidence which Montgomery provided to Comey and the FBI. The complaint and the motion are linked below and can also be found at www.freedomwatchusa.org.

Klayman had this to say: "Having asked the intelligence and judiciary committees in Congress to investigate the alleged obstruction of justice, and their having not taken action to date, Mr. Montgomery and I, on behalf of ourselves, had to take matters into our own legal hands. This mass surveillance, which threatens the privacy of all innocent Americans, must be ordered to cease forthwith, as it endangers our democracy and our republic."