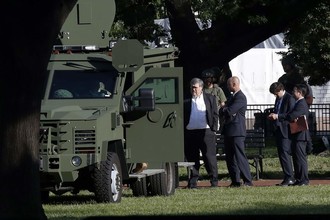 Barr says he didn't give tactical order to clear protesters
By Michael Balsamo, Associated Press
WJXT
June 7, 2020
Attorney General William Barr says law enforcement officers were already moving to push back protesters from a park in front of the White House when he arrived there Monday evening, and he says he did not give a command to disperse the crowd, though he supported the decision.

Barr's comments in an interview with The Associated Press on Friday were his most detailed explanation yet of what unfolded outside the White House earlier this week. They come after the White House and others said repeatedly that the attorney general ordered officers to clear the park. Shortly after officers aggressively pushed back demonstrators, President Donald Trump — accompanied by Barr, Pentagon leaders and other top advisers — walked through Lafayette Park to pose for a photo at a nearby church that had been damaged during the protests.

The episode played out on live television and prompted an outcry from some Republicans and former military leaders, including Gen. Jim Mattis, Trump's first defense secretary. Barr told the AP that much of the criticism was unwarranted and that Mattis' rebuke was "borne of ignorance of the facts."