Arpaio Sues New York Times for Alleged Malicious Defamation
Asks for Over $147,500,000.00 in Compensatory and Punitive Damages
Please Share and Donate to Support This Case! 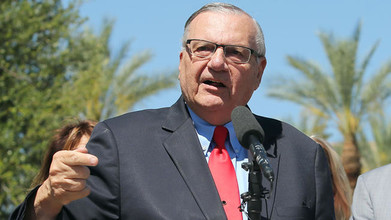 (Washington, D.C., October 17, 2018). Today, legal counsel for Sheriff Joe Arpaio, Larry Klayman, the founder of both Judicial Watch and now Freedom Watch and a former federal prosecutor, announced the filing of a lawsuit in the U.S. District Court for the District of Columbia (Civil Action No. 1:18-cv-02387) against the New York Times (NYT) and its editorial page reporter Michelle Cottle for alleged defamation per se, tortious interference with prospective business advantage and false light.

The complaint can be found at www.freedomwatchusa.org and was filed as part of Freedom Watch's Leftist Media Strike Force, which seeks to hold the dishonest and unhinged "fake news" left, and other irresponsible and lawless publications, accountable to the rule of law.

The defamatory article at issue, published on August 29, 2018, and written by Michelle Cottle, a member of the editorial board of the NYT, is entitled "Well at Least Sheriff Joe Isn't Going to Congress: Arpaio's Loss In Arizona's Senate Republican Primary is a Fitting End to the Public Life of a Truly Sadistic Man." In this article the defendants accuse "America's Sheriff" of scores of heinous crimes and allegedly seek to totally trash and destroy his reputation and standing in the law enforcement and political community, severely damaging his future plans to again run for public office. The article is alleged to have been published with malice.

Klayman had this to say upon filing this complaint for Sheriff Joe Arpaio:

"Sheriff Joe Arpaio, an American hero who has been widely called 'America's Toughest Sheriff,' has had a long and distinguished career in law enforcement and as an elected public official for nearly 25 years. The NYT and its hate filled reporter, Michelle Cottle, will be held accountable for their libelous acts, not just to bring about justice for my client, but all those who on a daily basis, are demeaned, trashed and harmed by this venomous leftist publication and its staff. By demanding and getting a jury verdict for large compensatory and punitive damages, we hope to bring this 'failing newspaper' to its knees and to end its mission to destroy all who it disagrees with, most notably conservatives, including the current president of the United States, Donald J. Trump."

To support Sheriff Arpaio's case and Freedom Watch's Leftist Media Strike Force, go to www.freedomwatchusa.org and sign up for our "Justice League" and donate.