A Jan. 6 Defendant Said He's 'Already Felt the Impact' of His Actions After Losing His Wife, Job, and Access to Guns
Order "It Takes a Counter-Revolution!" at Amazon.com
Donate and Support Freedom Watch at www.FreedomWatchUSA.org 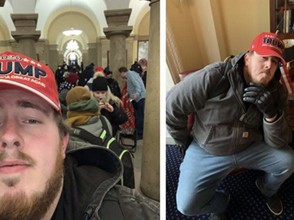 Yahoo News
October 1, 2022
A Capitol riot defendant's attorney listed the consequences he says his client has suffered as a result of his participation in the January 6 attack, while petitioning a judge for leniency this week.

Jerry Ryals of Oklahoma pleaded guilty to one count of civil disorder in May and is set to be sentenced next month. He was originally charged with five counts, including obstruction of an official proceeding, entering and remaining, and disorderly conduct. But as the government works to prosecute the more than 900 people arrested in connection with the attack, federal prosecutors have offered some rioters lesser charges in exchange for their guilty pleas.