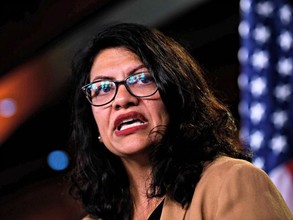 (Minneapolis, Minnesota, August 23, 2019). Today, Freedom Watch and its general counsel Larry Klayman, a former federal prosecutor, announced the filing of a complaint for alleged assault and battery and other discriminatory religious-based claims against Michigan Congresswoman Rashida Tlaib. The complaint, filed in the U.S. District Court for the District of Minnesota (Case No. 19-CV-2322), can be viewed at www.freedomwatchusa.org and is embedded below.

The complaint further alleges that Tlaib, a vehement anti-Semite and vowed opponent of Israel's right to exist, assaulted and battered conservative female Jewish journalist Laura Loomer during a campaign event in Minneapolis, Minnesota, for Tlaib's fellow anti-Semitic ally Ilhan Omar, when the two were running for US Congress in 2018.

Ms. Loomer, who herself is now running for US Congress in Florida's 21st Congressional District did not bring this complaint for political purposes, but to hold Tlaib accountable for her unhinged hatred of Jews and Israel, which manifested itself in Tlaib's physical attack on Loomer, which was caught on camera. During the campaign event which Tlaib attended in support of Omar's candidacy in 2018, Loomer asked simple and straightforward questions of the future Congresswoman about her stances toward Israel, Jews and terrorist groups such as Hamas. In response, and in the presence of Omar, who looked on approvingly, Tlaib violently lunged at Loomer, interacted with her physically and grabbed her phone, which Loomer was using to film the event which took place at a Palestinian restaurant. This put Loomer in alleged fear of immediate severe bodily injury. Later, Loomer filed a criminal complaint against Tlaib with the Minneapolis Police Department, which to this day has languished in its files — likely because the police do not want to be smeared as "Islamophobic" by Tlaib and Omar, especially given that Minnesota's powerful Attorney General, Keith Ellison, who is a Muslim political ally of Tlaib and Omar, is also an anti-Semite and close to Louis Farrakhan, leader of the Nation of Islam.

As a result, due to the inaction of the Minneapolis Police Department, Loomer felt duty bound to bring her complaint against Tlaib, so that this hate-filled anti-Semitic Congresswoman can be held to account to the rule of American law, rather than the Sharia law she and her sister radical Muslim Congresswoman Omar pledge their primary allegiance to.

Klayman had this to say upon filing the complaint for Loomer:

"The nation needs to thank my client Laura Loomer for having the courage to take legal action against someone who has bragged that the Holocaust gives her a 'calming feeling.' Few in this country will stand up to the forces of evil and Ms. Loomer is a stellar and shining example of what former President John F. Kennedy, Jr., wrote about in his famous book 'Profiles in Courage.'"