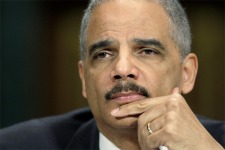 (Washington, D.C., July 14, 2013). Today, Larry Klayman, a former U.S. Department of Justice prosecutor and founder of Judicial Watch and Freedom Watch (www.freedomwatchusa.org), issued the following statement in the wake of an Obama Justice Department veiled threat to prosecute George Zimmerman now that he has been acquitted by a jury in Sanford, Florida.

"President Obama, again and, based on past actions, predictably playing a deceitful 'anti-white' racist game, issued a statement today disingenuously calling for calm after the Zimmerman verdict, but on the same day predictably stoked racism by having his equally 'anti-white' racist Attorney General, Eric Holder, issue a veiled threat that Zimmerman will now be prosecuted for criminal civil rights violations. Waiting over a year and a half to threaten prosecution, and only after a jury acquitted Zimmerman, Obama and Holder have again revealed that they are both 'anti-white' racists. While Zimmerman is half Hispanic, he has been associated by Obama, Holder and racist black activists like Jesse Jackson and Al Sharpton as being 'white.' They then blamed 'white' prejudice of blacks for the tragedy, when there was no evidence that Zimmerman acted out of anti-black racial hatred."

"While the death of Trayvon Martin is a tragedy, it is also a tragedy that our president shows his latent hatred of those who appear and who he 'cleverly' paints as 'white,' as well as his disrespect for our legal system. This comes ironically on July 14, the date the French revolution began with the storming of the Bastille. Perhaps it's now time to legally storm the Obama White House, and indeed Obama and Holder will be brought before a citizens' grand jury and be themselves indicted and tried before a citizens jury in Ocala, Florida, if they now make good on their 'anti-white' racist threat. See www.citizensgrandjury.com."

"Finally, my alma mater the Justice Department must not become the lackey of 'anti-white' racist behavior and hatred by our president and his attorney general."